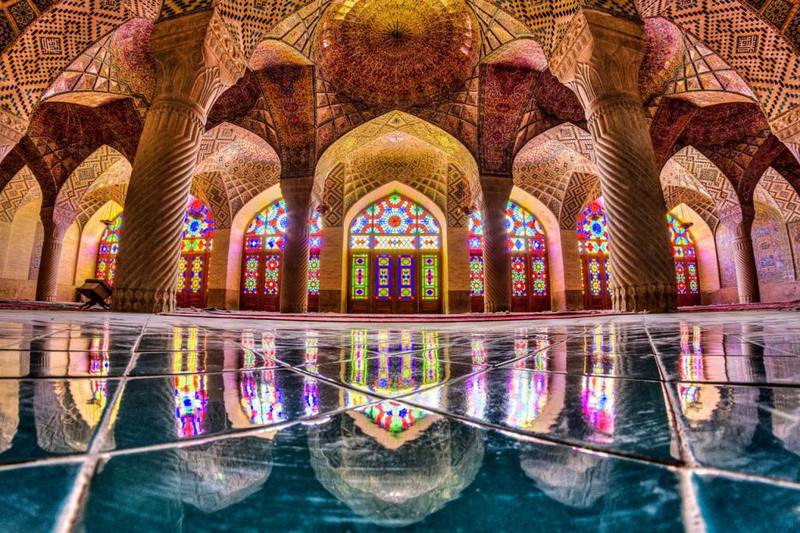 Nasir-al-Mulk Mosque, the Fair of Color and Light

Nasir-al-Mulk Mosque which is also called the Pink Mosque, Mosque of Colors, or Rainbow Mosque is located in Gaud-Araban neighborhood, Shiraz, Iran. This mosque is one of the oldest and most popular mosques in Fars Province.

Perhaps the days when Hassan Ali Nasir-al-Mulk built the building between 1876 to 1888 during the Qajar period, he did not think that the mosque became one of the most elegant mosques in the world. Nasir-al-Mulk Mosque beauty is the same as Sultan Ahmet Mosque in Istanbul and Al-Aqsa Mosque. 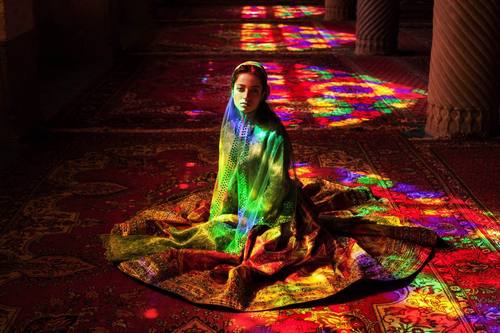 The Art of Light and Color

Nasir-al-Mulk Mosque is a place where the light is intertwined with colors. You will welcome to this lovely mosque by colors dancing. After the sunrise and in the morning, you can see the dance of lights and colors. The magical colors split into the floors and walls. The light passes through the stained glasses in its facade and reaches the floor and walls creating magnificent senses. You can see the entire building flooded in a rainbow. This is the art of Persian Islamic Architecture! The awesome Nasir-al-Mulk Mosque catches all your senses. 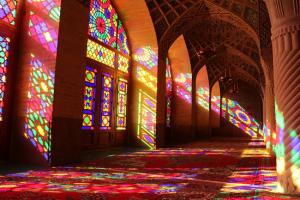 Nasir-al-Mulk Complex contained a mosque, a house, an abanbar (water reservoir) and a bath most of which was destroyed to build streets and new structures were constructed.

There is a large door in the entrance of the mosque which is decorated with seven-color tiles called “haft rang”.

There are two eastern and western shabestans in Pink Mosque. The eastern shabestan is used in the summer. It was designed to cool the weather inner the structure in the hot days of summer.

The western shabestan, which is one of the most unique ones in Iran, has a ceiling and walls decorated with seven-color tiles, beautiful paintings, and Qur’anic verses. The floor also enjoys turquoise tiles. There are seven wooden doors with colorful and unique glasses. It is worth mentioning that the decorations and masonry of this shabestan were inspired by Vakil Mosque. 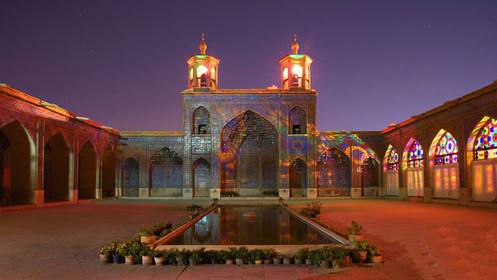 There are two northern and southern porches in Nasir-al-Mulk Mosque. The northern porch has three half arches on three sides; it is connected to the sahn from the fourth side. On the southern porch, there are two minarets and a courtyard with a rectangular pond and a stone fountain. 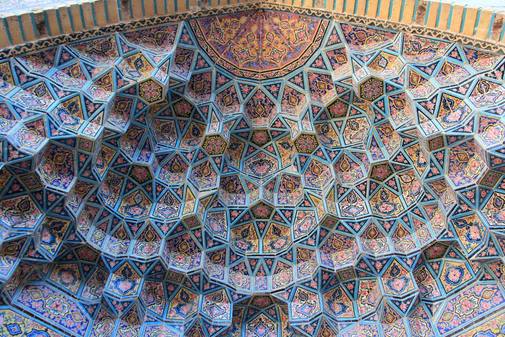 When Visit this Mosque 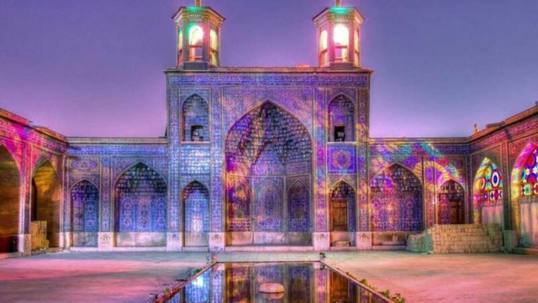 Iran Sun World, as an Iranian Travel Agency, provides you all kinds of services. Follow irantours24 for the best tours of Iran.